Time Flies – The Next Chapter

Once upon a time there was a girl who loved playing piano. She got pretty good and explored some jazzy tunes when a guitar prince asked her to join a jazz group. She took the plunge and immersed herself into the world of jazz and writing music and absolutely fell in love with it. The group became quite successful especially after the guitar prince and the keyboard girl eloped to the land of jazz – the US of A. They 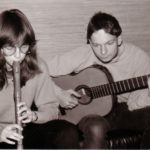 recorded many albums together and opened for some popular fusion groups and built a career together. But the jazz gods decided that fusion music was wrong and should be abandoned. All the other jazz gods turned to their acoustic roots and created repertory bands. The guitar prince and keyboard girl decided to start a family and the electronic instruments started gathering dust in the basement. But one day, a saxophone friend invited them to revive their fusion roots. 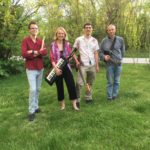 They traveled to Germany and took along a drum baron and a bass professor and teamed up with some of the German saxophone gods. The result was a smoking LP recording that got picked up by a German distribution company. Based on the initial success, the group started to embark on the next chapter which is about to begin. Only a few more days and The Time Flies will unite for a series of concert, new recordings, and an extensive European tour with stops in Germany, Austria, Azerbaijan, France, and England. They say the first love is the deepest – this is how it all started!

Seriously, research has documented that musical tastes are determined by the age of 18 and we are children of the Seventies. We are so excited to bring our original music to life and share it in the upcoming concert series together with recent NYU graduate Josh Roberts and jazz phenomenon Scott Pazera.

The Time Flies are buzzing

The Time Flies is a brand-new chapter of a style of music I thought I had out-grown almost 20 years ago.

From the time we had relocated to the US from Germany in 1988 to about 2002 my wife Monika Herzig and I had a “fusion” band called BeebleBrox. That band went through many different incarnations, recorded eight albums, played countless good and bad gigs, opened for big name acts such as Santana and Sting. Both of us were obviously trying to work out serious encounters with the music that popped into our lives at an early age. Artists like Weather Report, Chick Corea, John McLaughlin pulled our emotional strings. BeebleBrox was our own version of the music that became known as “fusion”. BeebleBrox tried over it’s 14 year lifespan but never quite took off and never quite died.

BeebleBrox finally met its end at the 2002 Indy Jazz Festival with a great performance. Then we had kids. Monika wanted to pursue acoustic piano jazz. The band members moved away……

For many years I had my own fusion oriented groups, Kwyjibo, which recorded one great little CD. After Kwyjibo imploded I had a Splinter Group. We never recorded, we had few gigs even though it was a great band. But that also went away and with it my interest in “fusion”.

I realized that I had spent decades of my life re-imagining (some would say copying) the music which powered my early years. It was relatively easy to discover ‘new’ music now. And to find that there is a lot of great stuff out there I never knew of because of my fixation on my own thing was…. strange.

However, Monika had been mentioning a BeebleBrox reunion. I didn’t want to have anything to do with that. While I am proud of a lot of the music we recorded back then I didn’t feel any particular desire to re-experience those days. Then, in the Summer of 2015, fateful events were put into motion by a longtime friend of ours in Germany. As a longtime Bob Berg/BeebleBrox fan he thought that the three tracks Bob had recorded with BeebleBrox on our second to last album Dominant Domain in 1997 had never received the recognition they deserved (Bob Berg used to be one of the jazz saxophone greats, right along with Michael Brecker and Bob Mintzer, and we paid him to play on three tracks). Our friend from Germany, Lothar, wanted to re-release these three tracks.

Lothar’s thought was to put the three tracks from 1997 on one side of a vinyl album and have a new version of BeebleBrox record a few fresh tunes for the second side. He had lined up a few of the top notch german sax players to record the new tracks and thought we would also use a german bass player and drummer. At that point everything was still floating around. In February this year (2016) Monika and I started to take this project serious and started to pick out tune candidates. I had located the original source tapes from the 1997 recording – on ADAT. While transferring the tracks to my computer I realized how dated the music sounded – Bob’s playing was stellar but the band was barely hanging on. Did we really want to re-release this? At least we could remix it and match the sound with the new tunes.

The next step came when we recruited two musician friends, drummer Josh Roberts, who had played with both Monika’s and my projects, and Quinn Sternberg on bass, highly recommended by Josh. One cold March evening we met in our basement to read through the tune candidates for the Summer recording. It felt and sounded great. Jokingly we talked about taking the material and go out as a band and play a few gigs – and maybe record one of the rehearsals.

All of that happened. The band name The Time Flies had been buzzing around between Josh and me for a while. All four of us were enthusiastically on board and we played a nice string of gigs, booked some studio time in early June and put down the tracks to have something on record. In the BeebleBrox days recording was a stressful experience for me; endless hours of pressure with the guitar never sounding the way I wanted it to and the band never really playing what I heard on my own tunes. The Time Flies recording session was really only intended as a good documentation. Little pressure. Everything sounded great. The guitar sounds worked. The band played so much better than I could have ever imagined. Good enough to put it out on CD.

The name The Time Flies is also fitting in that basically the band had a built-in expiration date because Quinn was going to move to New Orleans and Josh to New York after the Summer.

But the story doesn’t end here. Through some masterful organizing Monika was able to locate funds to take Quinn and Josh to Germany for the recording that had started the whole thing. We recorded a few new tunes with the German sax players. The recording engineer pointed out what I had been saying for months: The original Bob Berg tunes didn’t hold up to the new material. The sound couldn’t be matched and our 1997’s musicianship just didn’t compare. So we re-recorded new versions of the three tunes – keeping only Bob’s superb playing. This album is scheduled to come out in a limited vinyl edition in Germany later this year.